The team collaborated to build “The structure formally known as,” a tribute to Grammy-winning recording artist Prince. The cansculpture contributed 4,000 cans to this year’s food drive that will help feed Chicago’s hungry. Volunteers from the three firms began planning for the structure in April and spent the three months leading up to the August 9th Build Night designing, modeling and fundraising for the massive purple memorial. “Prince’s power and virtuosity inspires us to do great things,” explains Katie Morris, Primera’s lead for this year’s build. “As our team brainstormed ideas for this year’s structure, we decided to honor the late musician’s humanitarian efforts in our efforts to fight hunger in Chicago,” she continued. Primera has had the pleasure of partnering with Muller+Muller for the annual design-build event eight times in the past ten years. This was Hitchcock’s first year participating in the annual event.

“There really isn’t another option for AEC firms to give back quite like this one,” explains Matt Dvorak, Primera’s Director of Marketing and 2016 Canstruction Chicago Co-Chair. “Sixty of Chicago’s leading architecture, engineering and construction firms gathered around a single cause and combined our skillsets in creative ways to raise awareness for hunger issues and feed the 1 in 6 hungry men, women and children of Chicago. We’re glad to be a part of it.”

The 25 cansculptures from 2017 are on display throughout the first floor of the Merchandise Mart between August 10 and September 5, 2017.  Winners were chosen at the August 17th awards reception, ChicagoCAN, in the following categories: Best Use of Labels; Best Meal: Structural Ingenuity, Most Cans Used, Judges Favorite, and Honorable Mention. Voting for the People’s Choice Award is open through September 5, 2017 at canstructionchicago.org.

Canstruction Chicago is a design/build event which benefits the Greater Chicago Food Depository. Teams comprised of professionals from the AEC industry fundraise for, design, and build structures composed of non-perishable food items. Canstruction, Inc. is a nonprofit organization, founded in 1992 and headquartered in Atlanta, Georgia. Events are hosted around the world to help raise awareness of hunger issues through the creation of structures made entirely out of canned food. In total, over 300 cities have hosted Canstruction events with more than 45 million pounds of canned food donated to local food banks since 1992. 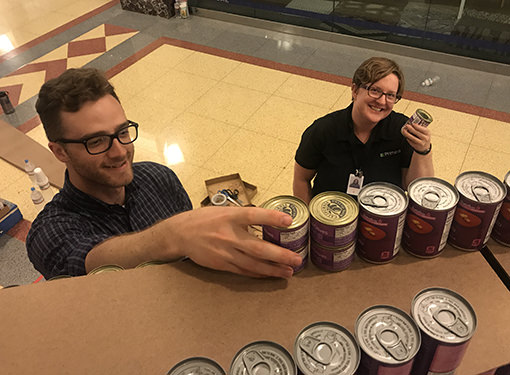 Team Leads Katie Morris (Primera) and John Wolfe (Muller+Muller) stacking cans to build the Prince tribute. (above) Some of the volunteers from Primera, Muller+Muller and Hitchcock Design Group posing with the completed structure. (main)