Primera had the good fortune to continue our support of Canstruction Chicago again this year. As the Greater Chicago Food Depository’s largest one-day food drive of the year, Canstruction Chicago’s 12th annual event collected nearly 150,000 pounds of food for its beneficiary’s network of 700 soup kitchens, food pantries, shelters and programs throughout Cook County. In addition to our team’s participation in the design-build competition, Primera served as the official nametag sponsor for last night’s ChicagoCAN, the annual award and cocktail reception celebrating the extraordinary efforts of all of the volunteers and participants.

Primera teamed up with Pepper Construction, Stantec, Hitchcock Design Group, and OFS Brands to build “CANeron Frye at the Museum,” a nod to the popular 80s-film Ferris Bueller’s Day Off. The 10-foot-tall work of art replicated the iconic scene in the movie where Cameron Frye stands quietly in front of George Seurat’s A Sunday on La Grande Jatte at The Art Institute of Chicago. Our team recreated the famous painting with cans of black beans, pinto beans, chili beans, peaches, sweet peas, spinach, corn, tuna, tomatoes, and potatoes. In total, the structure contributed 3,750 cans to the food drive in support of the Food Depository’s mission to end hunger in our community. Volunteers from each firm began planning for the structure in April and spent the three months leading up to the August 15th Build Night designing, modeling and fundraising for the massive structure. This is Primera’s ninth time participating in the past 11 years.

“Primera’s support of Canstruction is what first introduced me to it and inspired me to get even more involved,” explains Matt Dvorak, Primera’s Vice President of Marketing and 2018 Canstruction Chicago Steering Committee Co-Chair. “It’s an opportunity for all of us in the AEC industry to give back in a way that showcases our creativity, encourages collaboration with other firms, and ultimately raises awareness for hunger issues in our community,” adds Katie Morris, Senior Marketing Coordinator and Canstruction team lead for Primera. “There’s really nothing else like it,” Dvorak continues.

More than 60 of Chicago’s leading architecture, engineering and construction firms participated in the 2018 competition. The 24 cansculptures are on display throughout the first floor of the Merchandise Mart between August 16 and September 9. ChicagoCAN drew nearly 400 people to the Merchandise Mart last night for the annual awards reception. Winners were chosen in the following categories: Best Use of Labels, Best Meal, Structural Ingenuity, Most Cans Used, Judges Favorite, Honorable Mention and the coveted People’s Choice Award.

Canstruction Chicago is a design/build event which benefits the Greater Chicago Food Depository. Teams comprised of professionals from the AEC industry fundraise for, design, and build structures composed of non-perishable food items. Canstruction, Inc. is a nonprofit 501(c)(3) charity which hosts competitions and events creating awe-inspiring, gigantic structures made entirely out of full cans of food. Teams of volunteers participate in events in 150+ cities around the world each year. Afterwards, all food is donated to local food banks. Since 1992, Canstruction has raised over 72 million pounds of food for hunger relief organizations around the world with its signature, trademarked CanArt®. 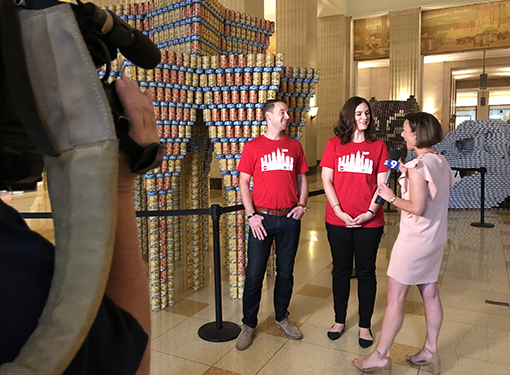 Primera volunteers teamed up with Pepper Construction, Stantec, Hitchcock Design Group, and OSF Brands to create "Caneron Frye at the Museum," a 3,750-can replica of the icon scene from the 80s-classic film Ferris Bueller's Day Off (main). Canstruction Chicago Co-Chair and Primera's marketing lead Matt Dvorak, alongside Katie Miller of IA Interior Architects, being interviewed by Ana Belaval for the WGN News (above).