Primera’s Canstruction Chicago team was elated to win the coveted People’s Choice Award at last night’s annual charity cocktail and awards reception – ChicagoCAN, held at the Merchandise Mart. The structure received nearly 2,000 online votes throughout the week-long voting period, one-quarter of the total votes cast for the 19 structures in this year’s competition. As co-chair of the event, Primera’s head of marketing, Matt Dvorak, co-hosted the awards presentation. The remaining five award winners were chosen by a panel of judges and included Best Meal, Most Cans Used, Best Use of Labels, Best Overall Design, and Structural Ingenuity.

Our participation this year marks the tenth time Primera volunteers have taken part in Canstruction Chicago. Teams comprised of AEC industry professionals from all over the Chicagoland area fundraise for, design, and build unique Canstructures with full cans of non-perishable food items, all of which are donated to the Greater Chicago Food Depository’s (GCFD) to help in the fight against hunger. Canstruction Chicago is GCFD’s largest single-day food drive annually, with a record collection of 162,000 cans this year.

For the 13th annual competition, Primera teamed with Pepper Construction, Stantec and USG to build “Jack Skelling-CAN,” otherwise known as the “Pump-CAN King” or the patron saint of Halloween. The design celebrates the protagonist of Tim Burton’s 1993 stop-motion Walt Disney Pictures and Touchstone film The Nightmare Before Christmas. The sculpture concept was a collective decision to showcase the team’s charisma, electric energy, and community support to help the GCFD in its mission to end hunger in Chicago.

“Year after year, I’m inspired by the incredible talent and kindness in this industry. Canstruction showcases that in a truly unique way,” explains Matt Dvorak, Primera’s Vice President of Marketing and 2019 Canstruction Chicago Steering Committee Co-Chair. “The artwork entertains thousands throughout the month-long exhibit, but the awareness it brings to hunger issues in Chicago is what makes the event so powerful.”

Standing over eight feet tall, Jack Skelling-CAN consists of more than 5,000 cans of tuna and corn that will be donated to the Food Depository when the structures come down next month. Volunteers from each firm began fundraising, planning, and modeling the structure over the course of the last five months, all in preparation for the October 10th Build Night at the Merchandise Mart. 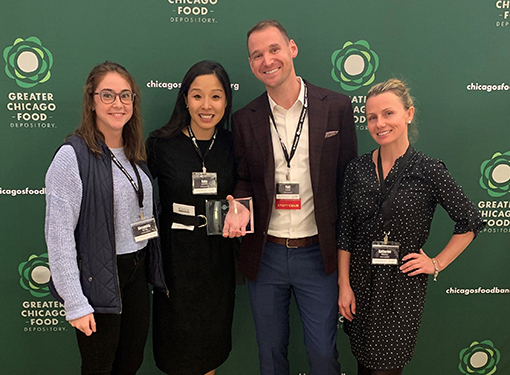 Volunteers posed with the completed structure at the October 10th Build Night (main). Primera employees (pictured above) were on hand to accept the People's Choice Award at last night's ChicagoCAN reception alongside representatives from our partner firms, Pepper, Stantec, and USG.