Primera is proud to announce that Vice President and Consulting Division Manager, Trevor Leeds, has been listed among Crain’s 2021 Notable Military Veteran Executives. Trevor, and the other 29 honorees, were selected among a group of executives that returned from service and are making their mark at firms across the Chicagoland area. Each of these individuals have made significant contributions to advancing the issues that affect veterans within the workplace.

Trevor served in the United States Air Force for seven years. He now leads Primera’s business consulting division with a passion for people and a strong personal value system. He is an advocate of transitioning or un/under-employed Veterans for the company and the region. He reaches out to talk with veterans to discuss their opportunities and help translate military skills to civilian. He serves the community by being present, referring and connecting veterans to good companies. He also advocates for, and partners with, veteran-owned businesses. He connects with military and veterans via social media and in person to be available and offer support for personal and professional activities.

Trevor joined Primera during the summer of 2020 and accepted the leadership role of a team he wouldn’t meet in person for months. He’s grown his team by 25%, increased profitability year-over-year, and spent a considerable time mentoring his division to launch major go-to-market campaigns to expand Nationally.

“Trevor embodies Primera’s people-focused values and his support of Veterans is an inspiration to all of us at Primera,” says President & CEO Erin Inman. “He supports inclusion for all and has applied those principles throughout his career, working to give people equal opportunity and creating better environments for everyone.”

Primera would like to congratulate Trevor, and the many talented military veteran executives who devote their careers to supporting others. This year’s Notable Military Veteran Executives are honored in the November 8th print issue of Crain’s Chicago Business, as well as online at ChicagoBusiness.com.

Crain’s Chicago Business is a regional business publication from Crain, one of the largest privately owned business media companies with 21 leading business, trade and consumer brands in North America, Europe and Asia. It is a top source of news, analysis and information on business in metropolitan Chicago for decision-makers in the private and public sectors. 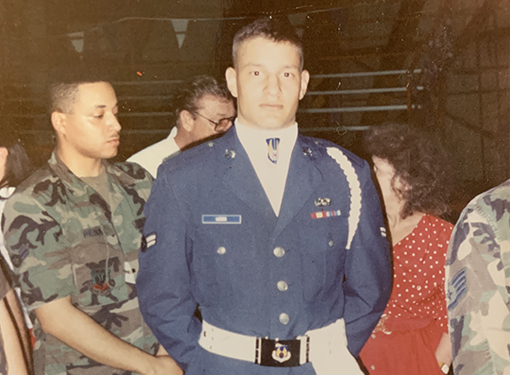 Trevor, pictured above at Tinker AFB serving in the United States Air Force in 1991, is recognized among a list of 30 Veterans that have forged remarkable civilian careers following their military service.