Primera’s co-founders and co-CEOs, Michael DeSantiago and Pedro Cevallos-Candau, were both honored among 20 2015 inductees into the Chicago Area Entrepreneurship Hall of Fame (Hall of Fame). The two were inducted at the 30th annual gala and awards dinner at The Field Museum on Thursday, October 8, 2015.

Each year the Entrepreneurship Hall of Fame Award recognizes innovative business leaders nominated from throughout the greater Chicago metropolitan area. The Hall of Fame recognizes members who, through the businesses they have built and through their personal engagement, have had an enduring commercial and social impact, fostered a diversified economic engine, and have enhanced their communities.

“These men and women exemplify courageous, tenacious, and dedicated entrepreneurial leadership and fortitude. They have followed Peter Drucker’s adage, ‘The best way to predict the future is to create it,”’ said Nancy Harvey, executive director of the UIC Institute for Entrepreneurial Studies.

“We’re both grateful to be honored among such a prestigious list of Chicago area entrepreneurs,” said Michael DeSantiago. “The real honor is to see the success of the firm’s more than 200 current employees and the countless others that have come and gone since we founded Primera in 1987. They’ve all played a huge role in our success and that of this great company,” adds Pedro Cevallos-Candau.

The Hall of Fame is part of the Institute for Entrepreneurial Studies at the UIC College of Business Administration, one of the nation’s leading centers for entrepreneurship teaching and research. Now in its 30th year, the Hall of Fame is lauded as the oldest and most prestigious Chicagoland entrepreneurship award, and has inducted nearly 500 entrepreneurs since its inception in 1985. Members include the founders of Motorola, Goose Island Breweries, Crate & Barrel, Jimmy John’s Gourmet Subs, Groupon, McDonald’s Corporation, Peapod and Aon Corporation.

All nominations were evaluated by a distinguished panel of judges, and finalists were personally interviewed by the judges and existing members of the Hall of Fame. 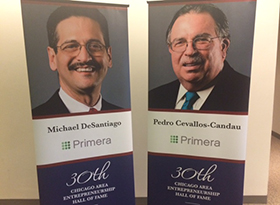 Michael and Pedro were inducted into the 500+ member Hall of Fame at the 30th annual gala at The Field Museum on October 8.