Put Out the Fire Before it Starts
February 6, 2014

Between 2009 and 2011, an estimated 86,500 nonresidential building fires were reported each year to United States fire departments. These fires caused 85 deaths, 1,325 injuries, and an estimated $2.6 billion in property losses each year. Smoke alarms were not present in 52% of the larger buildings and 56% of the fires extended beyond the room of origin, with 11% spreading beyond the building of origin. Some of this destruction could have been reduced by paying closer attention to detail during the building design process, particularly with respect to fire protection engineering.

Federal entities such as the Department of Defense, the General Services Administration, and the Department of Veterans Affairs have strict and definitive requirements regarding fire protection engineering to help prevent these insufficiencies – specifically, the requirement of including a licensed FPE during all phases of the design process. These federal agencies often act as the authority having jurisdiction (AHJ) for projects involving the buildings they own, so these requirements are in place to ensure safe and code-compliant building design and construction from day one. As the design industry progresses, many commercial and institutional entities are beginning to see the benefits of having an FPE on their projects and are now following the example of the federal government.

An FPE can help with analysis, calculations, and the design of the project as it relates to building construction, occupancy, egress, fire alarm, fire extinguishing systems, and smoke control systems. They allow for greater design flexibility and can provide greater fire safety. Conversely, if an FPE is not brought in until after problems are identified, it can cause delays in the project schedule. The FPE can maintain a dialogue with the AHJ throughout each phase of the project to ensure all fire protection and life safety issues are addressed from the beginning. With all these benefits of involving an FPE at the earliest planning stages, it’s almost common sense to view fire protection engineering holistically as part of the design process rather than an afterthought. 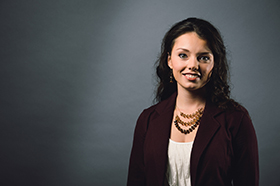 Engaging Fire Protection Engineers early in the design process can greatly reduce the number of fires and save lives.

Amanda is a registered Professional Engineer in our Buildings Group. Her work has included engineering, design and construction administration of plumbing and fire protection systems for institutional, educational, healthcare, commercial, residential, and light industrial facilities. Click here to read more about Amanda.