How the Right Mass Notification System can Save Lives
November 25, 2015

Over the past few decades, there has been an ever-increasing recognition of the importance of mass notification systems (MNS) in facilities in order to increase the level of life safety. A MNS or emergency communication system (ECS), as defined by the National Fire Alarm and Signaling Code (NFPA 72-2010), is a system used for the protection of life by indicating the existence of an emergency situation and communicating information necessary to facilitate appropriate response and action. The need and desire for these systems are growing ever so rapidly on university campuses, and in K-12 schools, hospitals, offices, government facilities, and large venues prone to terrorist attacks. Other facilities with a vulnerability to emergency situations are also starting to look into implementing such systems.

The need for mass notification can be traced back to June 25, 1996, when terrorists exploded a fuel truck adjacent to a housing complex in Khobar, Saudi Arabia. The eight-story building housed U.S. Air Force personnel. In all, 19 service members and one Saudi were killed, and 372 others were wounded. It was determined that casualties could have been reduced if any kind of central emergency notification system had existed on the premises. Subsequent to these tragic events, the Department of Defense (DoD) developed the document, Unified Facilities Criteria (UFC) #4-021-01 that defined Mass Notification as “…the capability to provide real-time information and instructions  to people in a building, area, site, or installation using intelligible communications including visible signals, text, and graphics, and possibly other tactile or communication methods.”

Most of us will not soon forget the growing list of catastrophic events that continue to warrant the need for  effective emergency response plans: Columbine High School (1999), Virginia Tech Campus (2007), Aurora, Colorado Movie Theatre (2012), Sandy Hook Elementary School (2012), and most-recently Umpqua Community College in Oregon (2015). The implementation of a mass notification system may not entirely prevent these tragedies from occurring; however, a system compounded with an effective emergency response plan can significantly mitigate the impact of such devastating events and potentially save lives.

When determining whether or not to provide a mass notification system in a facility, owners must first begin with a risk analysis. The owner will have to determine if their facility is vulnerable to an emergency situation. Location, site layout, emergency operations, and demographics of building occupants can all impact the decision. In addition, regulatory requirements should be considered. Even though MNSs are not currently required by code, if installed, the systems shall conform to all applicable codes and standards. NFPA 72-2010, Chapter 24 covers requirements for indoor and outdoor emergency communication systems. Other codes and standards that should be consulted include UL 2572 and NFPA 1600. The DoD document mentioned above, UFC #4-021-01, can also serve as a great reference document.

An owner will also have to consider how such a system can be implemented and integrated with an emergency action plan. This plan will need to accommodate emergency responses to various unpredictable scenarios which may be challenging. However, if occupants and facility management are properly trained on the operations of an emergency response plan, an MNS can be very effective.

It is not uncommon for MNSs to be confused with a fire alarm system. The notification devices in both systems can physically look like one another, they serve a similar purpose, and both systems even have the capability to be programmed together as one comprehensive system. Although both systems share a similar function in alerting the public to maintain life safety, there are several differences between the two. One fundamental difference is that a fire alarm system primarily focuses on managing building evacuations in the event of a fire. On the contrary, MNSs are used to communicate with the public in response to other threats such as severe weather, a terrorist threat or an active shooter on the premises. Unlike a fire alarm system where the primary function is to evacuate the building, evacuation may not always be the best course of action for every emergency and may even be ill-advised depending on the nature of the threat. For example, in circumstances where there is a gunman on campus, students and faculty are typically advised to remain inside on lockdown until the area is deemed safe. Other situations where evacuation may not be recommended could include a severe weather alert, such as a tornado warning, where people are advised to seek shelter. Another difference between a fire alarm and a MNS is that in a MNS the delivered message must be intelligible as opposed to audible horns (even though some fire alarm systems do use intelligible voice communication in place of horns). The requirement for intelligibility is stated in NFPA 72 2010 Edition, Chapter 24 “Emergency Communications Systems,” which requires that the message be comprehensive and clearly understood. Also, per NFPA 72, the message used in a MNS must be provided in real-time and include actionable information. Technology-based intelligible message systems can be used to send out warning messages that inform the general public of a situation and provide guidance as to the best course of action. For example, the location of risk or hazard, authorities in charge of the situation, and/or a possible timeline for resolution may be indicated within the message. This information can be significantly more beneficial in aiding people during a particular emergency, other than a fire, where the recommended action is be something other than evacuation.

There are two major types of communication devices that can be utilized in a MNS: individual devices or group devices (i.e. Public Communication Devices), which serve several people. Specific devices used to deliver messages to individuals include cell phones, pop-up messages on computer screens, voicemails, or text messages. Public Communication Devices include: digital electronic signage, a loud speaker as part of a public address (PA) system, or a large flat panel display on a wall. Mass notification systems are designed to provide real-time information and instructions to the occupants of a single building, university campus or even an entire city.

Tactile or other communication methods, including text messaging, email, instant messaging, social media, or other voice services, may also be used. Voice services refers to telephones, cell phones, VoIP, and outdoor and indoor public address systems, among others.

In summary, the desire for increased measures to protect life safety by use of mass notification systems has grown significantly in recent years. Contributing to this increase in demand is the availability of communication technologies that provide real-time situational awareness to the public, thus protecting lives and property. Additionally, the increasing number of threats and catastrophic events compounded with people placing a much-needed premium on life safety have all contributed to the popularity of MNSs. The Center for Campus Fire Safety, which is the nation’s leading resource for public fire and life safety education on college campuses, recently conducted a survey and determined that 62% of university executives were in favor of advancing and implementing MNSs on their campuses. As such, the Center for Campus Fire Safety recently presented to the NFPA a formal request for the inclusion of mass notification systems in the Life Safety Code (NFPA 101) and NFPA 5000 for educational occupancies. Several proposals have been submitted as well to the various building code panels and NFPA Technical Committees to at a minimum include the requirement for a risk analysis for all occupancy classifications.

Owners can greatly benefit from teaming up with consultants to conduct risk assessments and determine the need for a MNS. Once the decision is made, the consultant can help the owner determine the most efficient approach to the system design based on available funding, infrastructure and risk management goals. Existing communication technology can also be leveraged for emergency communication. For example, TV and computer monitors in lobbies with high traffic can be overridden and used as digital signage to display messages during an emergency. With just a few adjustments, PA systems can also be supervised and incorporated into a MNS. The benefits of having a mass notification system outweigh the alternative, and should not be underestimated. With the right approach, implementation of a mass notification system can be an easy and seamless process that should be considered in every situation. 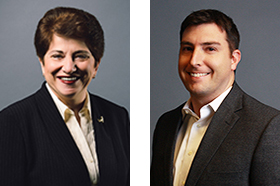 Mass notification systems are designed to provide real-time information and instructions to the occupants of a single building, university campus or even an entire city.

Rosa is an Electrical Technology Manager with over 35 years of wide ranging experience in the design of complete electrical systems for new and remodeled building construction with numerous applications including transportation, retail, museums, laboratory research facilities and hospitals.  She also has extensive experience in handling projects for the University Campus environment.

John has ten years of Electrical Engineering experience. He has tested his skills with designing power distribution, lighting, fire alarm, communication systems, and lightning protection for several different building types. Some of these include hospitals, nursing homes, retail spaces, schools, restaurants, high rise residential, and office buildings. Along with being a highly qualified engineer, he also has also worked in the project coordinator role overseeing projects from their design stage to final construction. This has helped him in his current role to understand every detail of his projects and how they progress through each phase.