LED technology is constantly evolving, so we’ve done some research and tested LED products in real applications to separate LED lighting facts from myths. The myths covered in this article include advertised claims and documented studies about lighting products. The verdicts presented are based on our reviews of product information and research and our experiences with LED products in real applications.

BUSTED: Initially, manufacturers claimed that LEDs would last for 100,000 hours. Unlike more traditional sources which typically burn-out before experiencing significant decreases in light output, LEDs may still appear to be operational despite reaching a “parametric failure” point at which they are no longer producing enough light â€“ typically considered to be at 70% of the original LED output. The Illuminating Engineering Society of North America (IESNA) has developed procedures to help regulate lumen output and lifetime testing and prediction LM-79, LM-80, and TM-21. Today, typical lifetime ratings for many linear LED modules and luminaires range from 50,000 to 60,000 hours. Many of these LEDs may continue to produce greater than 70% of their initial lumens past this point, however manufacturers are limited in making longer lifetime predictions by the short period of actual lifetime testing possible for new LED sources. These rated lifetimes are generally longer than typical linear fluorescent sources, and LEDs may outlast even “extended life” fluorescent lamps, especially in installations where luminaires are switched on and off often. It is important to carefully consider lifetime claims, and consumers should be wary of exceptionally long lifetime claims.

MYTH #2: ALL HOUSEHOLD LIGHT BULBS SHOULD BE REPLACED WITH LED “REPLACEMENT” LIGHT BULBS

SOMETIMES: While even two years ago LED replacement bulbs were not a possibility for most residential users, more companies have now developed LED replacements for common household bulbs, with some available for as low as $13 with dimming. While cost rises rapidly for increases in light output and dimming capability, longer rated lifetimes and lower energy consumption prompt many consumers to consider LED replacements. The life cycle costs of lower cost dimmable LED lamps are now beating compact fluorescent, which is a big motivator for energy-conscious consumers. That being said, it is important to read reviews and consider store return policies, as not all LED replacement lamps are created equal.  It is also important to read the fine print.  Many LED replacement lamps are rated for open fixtures, so if you install them in recessed fixtures the life of the lamp will be reduced!

BUSTED: LEDs do require less maintenance than most other lighting sources. However, like all lighting fixtures they still require annual or bi-annual cleanings to ensure the light can get out of the fixture. Longer lifetimes can result in the lowest number of trips possible going up and down a ladder or cherry-picker for maintenance personnel. However, there is a trick to the maintenance of LEDs that is often overlooked: at the rated end of life for LED products, the entire fixture may need to be replaced. For typical light sources it is as simple as purchasing a new light bulb and/or ballast. For LEDs you may be required to get a manufacturer or designer involved to find a solution that will be compatible with your LED fixtures. Furthermore, LEDs will continue burning while becoming slightly dimmer over time. Eventually they will need replacement even though they still turn on and seem to work. Owners and maintenance staff will need to be educated and become proactive rather than waiting until the lights go out, because the replacement LED may have a long lead for delivery. That being said, many manufacturers are now making it easier to replace LED modules and drivers in their LED luminaires from below the ceiling and without needing to replace the entire fixture. Manufacturers are increasingly recognizing the need for improved ease of luminaire maintenance, and the importance of the ability to upgrade LED components as LED technology continues to evolve and improve.

CONFIRMED: LEDs currently are the most energy efficient source in several applications. However, LEDs are an ever-evolving technology, and it remains important to consider other performance characteristics and the efficacy of comparable fixtures with other sources to ensure that energy savings and performance will justify the added fixture cost. Right now there is a product market where LEDs can provide a significant energy savings over our traditional solution â€“ exterior lighting. On a recent project Primera was asked to compare the traditional metal halide street lighting to an entirely LED alternative. The switch to LEDs realized an energy savings of over 50% for pedestrian street lighting alone. In interior lighting, some applications (such as LED vs. CFL downlights) experience large energy savings with LED. Linear fixtures present a more even field; on a recent project, a luminaire housing available with both linear fluorescent and LED sources offered about equal efficacy values for both sources at approximately 76 lumens per watt.

LEDs are making great strides, and represent more and more of the new technology being developed in the lighting industry. Many more LED options with better performance are available than even two years ago. That being said, while many products stand up to the claims made by manufacturers, it is important to consider the evidence carefully before believing each and every story. Quality and performance varies widely across the board, so it is important to have a careful eye looking over your LED specification (or an LED-knowledgeable designer). With that in mind, you can achieve a high quality, sustainable solution for your project. 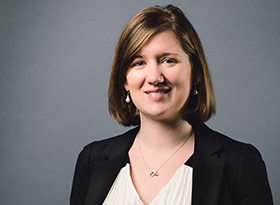 She was assisted by lighting intern Elizabeth Kimble who has now completed her Bachelor and Master of Architectural Engineering in the Lighting and Electrical option at Penn State University.