Northwest Indiana Gearing up for Transit-Oriented Development Possibilities
May 8, 2014

Indiana is known as “The Crossroads of America” because it connects several major highways to the rest of the country. Countless people, industries and businesses rely heavily on having a strong infrastructure and transportation system in place in order to compete in the marketplace. That is why the State of Indiana is looking to make significant investment in major improvements to the state’s public transportation system, which will in turn provide opportunities for future Transit-Oriented Developments (TODs), particularly in Northwest Indiana.

A TOD is a relatively new concept that consists of a mixed-use residential and commercial area designed to maximize access to public transport, and often incorporates features to encourage transit ridership. Typically, TODs are planned and developed in the same way communities used to naturally develop before the advent of mass automobile use in American society. The basic concept of a TOD is as follows: a centrally located station is surrounded by high-density development, similar to a city’s “downtown”.  The higher density land use is typically located within a half-mile radius of the transit station. Densities progressively decrease as development moves farther from the center. There are many benefits derived from this concept and these impacts are usually what communities strive to achieve in development plans. Some of the benefits of TODs include:

Recent proposals to extend NICTD’s (Northern Indiana Commuter Transportation District) South Shore Line commuter service and to contract Amtrak’s Hoosier State service present future TOD possibilities for Northwest Indiana. The South Shore commuter line currently serves northern Lake, Porter, LaPorte, and St. Joseph counties with a ridership of more than 3.6 million in 2013. The proposed South Shore extension would travel along the abandoned Monon corridor in Hammond and Munster and then the active CSX corridor in south Munster and Dyer. Future expansion plans also extend the South Shore line even further to Lowell and Valparaiso. The Hoosier State, a quad-weekly Amtrak passenger train that runs between Indianapolis and Chicago, also utilizes the active CSX corridor in Munster and Dyer and had a total ridership of approximately 37,000 in 2013. The combined population of the municipalities that the proposed line traverses is more than 120,000 and will serve a greater population when adjacent communities are included. This extension will allow more Northwest Indiana residents access to the Chicago job market and prompt local communities and developers to look at TOD possibilities.

Sufficient funding has been pledged by the Regional Development Authority and local communities in Northwest Indiana and local municipalities are planning accordingly. The City of Valparaiso has established a TOD district in anticipation of a future extension of the South Shore commuter line while the The Town of Munster has initiated plans to include TODs as described in their 2010 comprehensive plan. The South Shore extension through west Lake County and planned future extension to south Lake County and Porter County will allow communities along the line to look at TODs and reap the rewards. The benefits are numerous and implementing these development practices will set the foundation for stronger communities and a healthier Northwest Indiana economy. 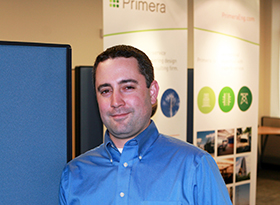 Ryan has experience in roadway design and pavement design of transportation projects which include state and US roads, collector roads and arterial highways. He also has expertise in construction management and inspection which included successfully maintaining communication between the affected public and other agencies on a number of projects. In addition, he has experience in the design of pipe lining projects and institutional road projects which included resurfacing for state parks and hospitals in Indiana. Ryan is familiar with the following technologies: MEPDG, MicroStation, AutoCAD, InRoads, ProjectWise and SiteManager.

Ryan has moved on to pursue other opportunities. For more information on Primera’s highway transportation capabilities, click below to connect with Primera’s Indiana office lead, Brad Minnick.