Park spaces within urban areas have been important to city planners for centuries. As population and density continuously increase, these green spaces prove to be critically important and subsequently offer a long list of benefits to both city government and residents alike. However, unlike the early 1800s, there is a serious lack of undeveloped space in today’s urban environments. As a result, people are looking at existing industrial spaces and reclaiming them for new and innovative park spaces. In the mid-to-late 1990s, the city of Chicago began converting an existing lakefront rail yard and public parking lot into a world-renowned 24.5-acre park. In 2004, Millennium Park opened to the public and quickly became the second-most visited tourist attraction in Chicago. Likewise, the city continues to convert underutilized space to innovate public spaces. After nearly a decade of planning, work began late last summer to transform nearly three miles of unused rail line into an elevated, linear park to be known as the Bloomingdale Trail. (The trail and adjacent parks will make up The 606.) Additionally, work is well underway to convert the under-utilized space above the existing Millennium Lakeside underground parking garage just north of Millennium Park into Maggie Daley Park. As cities, like Chicago, look for innovative ways to reclaim existing industrialized spaces for green space use, architects and engineers are finding that these developed sites bring a host of challenges requiring creative thinking and innovative designs. The aforementioned Maggie Daley Park provides an excellent example.

Maggie Daley Park, formally known as North Grant Park, is a 20-acre site adjacent to Millennium Park in Chicago. Like its neighbor, it sits atop an existing underground parking garage, the Millennium Lakeside Garage. While the park previously offered acres of underutilized green space, the Chicago Park District capitalized on the need to waterproof and renovate the underground garage structure as an opportunity to refresh the design, layout, and amenities for this highly-visible downtown park. Like most other existing industrialized spaces, this park renovation project required multiple innovative engineering solutions in order to create world-class elements and attractions on top of an existing structure. Major challenges included the load bearing limitations of building on a massive rooftop, garage ventilation issues and drainage complications. Likewise, creative solutions were required for the mechanical systems, lighting controls and reuse of existing materials. While the challenges and solutions highlighted in the following paragraphs are specific to the Maggie Daley Park project, these types of innovations can be incorporated into many of today’s parks and recreation projects.

Landscape Topographic Changes
Since the project resulted from the initial need to replace the waterproofing membrane on the garage roof, all of the existing soil and landscape had to be removed, which in turn opened up an opportunity to completely redefine the topography on the site. An otherwise flat landscape could now be converted into highly visual hills and valleys. However, the challenge for the design team was working within the load bearing limitations for the garage structure. Any increase greater than five feet of in-grade elevations would exceed dead load restrictions for the roof and risk a collapse or structural failure within the garage. Rather than eliminating the desired topographic changes, lightweight geofoam was used to build height in lieu of heavier soil. Geofoam is a styrofoam-like engineered material designed to be buried and structurally loaded. Roughly 80,000 cubic yards of geofoam were used on the project. To put that into perspective, that’s enough geofoam to fill 24 Olympic-sized swimming pools or reach over 37 feet high if spread evenly across a professional football field!

Garage Ventilation
The Millennium Lakeside underground parking garage will remain open after the park project is complete.  Since all underground parking garages require fresh air intakes and exhausts in order to safely occupy the space, the existing garage has approximately 37 fresh air intakes and 8 exhaust vents positioned within, and bordering, the park that had to be maintained. As a result, exhaust openings coupled with garage egress stairs were incorporated directly into the landscape design to have minimal visual impact on the new park. Fresh air intakes were the most challenging due to the fact that many of the large vents were located within proposed open meadow plains. To accommodate for the open areas, the design team created air tunnels between the garage roof and the park grade surface to redirect existing vents to new openings at the surface in positions that didn’t interrupt the revised landscape.

Stormwater Drainage
Traditional green parks provide natural storm water filtration, drainage, and retention within the soil. However, the situation changes dramatically when it’s actually a massive rooftop garden. Previously, water would percolate through the park soil and pond at the barrier created by the roof waterproofing. The existing design of the roof includes the common structural element of a chamfer, which means the middle is the high point and the edges are the low points. With the chamfer, ponded storm water on the western half of the park flowed west along the roof and the eastern half water would flow east. While the east flowing water connects into existing storm drainage infrastructure that relieves the roof of the collected water, the west flowing water previously had no outlet with the Columbus Drive dam. As a result, the water would pool and increase loading on the roof structure. As part of the new park project, the roof slope was augmented so that all storm water would flow east regardless of where the rain landed. Additionally a network of tubing was installed to whisk water off of the roof, eliminating the additional load on the garage structure.

Wireless Lighting Control
In any large-scale park project, lighting is a critical element. Proposed lighting fixtures for the redeveloped park varied from 60-foot tall masts to dainty suspended balls of light, including the familiar Chicago acorn-topped light poles. One common element among all of the proposed light fixtures is the need to pass from day to night. Newer technologies and programming options allow for the fixtures to gradually dim during the night and eventually turn off, thus avoiding dramatic extinguishing of light when the park closes at 11:00 pm. Due to the vast size of the park, this setting would typically require thousands of feet of conduit and cables in order to provide a traditional synced lighting control system. Instead, the design team incorporated a wireless lighting control system that utilizes tiny antenna and line-of-sight technology. The added benefit of the wireless system, beyond eliminating the need for control wiring and associated conduit (cost and material savings), is the ability to reprogram any light fixture remotely from a computer terminal. This capability allows for maximum flexibility in adapting to future park needs.

Ice Ribbon Supporting Infrastructure
One of the most outstanding attractions for the site is the addition of a unique quarter-mile ice skating ribbon. The “ribbon” rethinks the traditional ice rink concept and mimics skating along a frozen creek within the woods. The equipment and infrastructure required to produce the ice for any rink surface has a limited range, with the ideal design placing this equipment in the center of the rink. While this isn’t an option with traditional rinks, it can actually be accommodated in the hollow ribbon. The question then becomes how to incorporate the equipment into the landscape without utilizing an unsightly building and without affecting the structural integrity of the rooftop. The solution was rather unique. The design team housed the equipment room within the proposed rock climbing walls to offer maximum concealment. In addition, new structural reinforcing piers were tied directly to the garage columns to avoid overloading the roof deck. The placement of the rock climbing walls and equipment building hidden within was critical to align with tested existing structure.

Recycling of Existing Resources (Trees)
The necessary removal of all the 105,000 cubic yards of top soil covering the garage roof resulted in the elimination of hundreds of mature trees and other landscaping. While studies concluded that the trees could not be transplanted to another park, something had to be done to reuse these massive trees. Subsequently, since one of the park’s goals was to make the environmentally-conscious design visual, 160 affected trees were treated and repurposed into benches, walkway planks, and landscaping infill. Certainly that eliminated waste, but it wasn’t enough to showcase an environmentally-conscious design. To achieve that, the most dramatic, full trees are being stripped of minor branches and will be mounted whole in an inverted position throughout an Enchanted Forest play garden. This maze and exploration path creates a unique design piece for children that simultaneously showcases natural resources.

The project’s intricate designs were completed in August 2012 and construction began in October 2012. While there is still a great deal of work to be done, the end is in sight. Earlier this month, crews began planting the first of more than 1,400 proposed trees for the site.

In summary, despite the challenges that revitalizing an industrialized space brings, these parks can help define a city and its neighborhoods. Healthy communities need healthy green spaces and as our cities continue to grow, we will be continuously challenged with finding creative ways to build new parks. As for Maggie Daley Park, all of these creative design solutions are sure to result in Chicago’s next iconic space when it opens later this year. 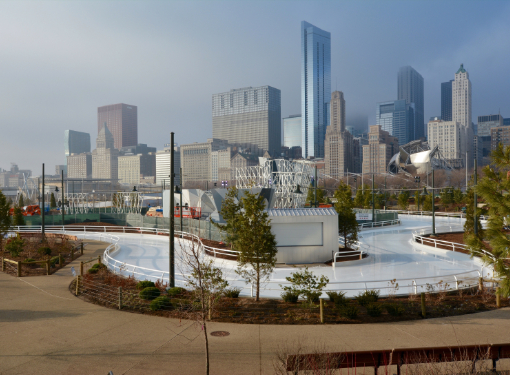 In order to change the topography of the site, lightweight geofoam (a styrofoam-like engineered material) was used to build height in lieu of heavier soil (left).