Each year the Electric Association’s Consulting Electrical Engineers Division (CEE) selects a small number of electrical engineers from across the industry and recognizes them for their technical merit and service. Among those awards is The William P. Hogan Award for Technical Merit which is awarded to the consulting electrical engineer who has distinguished himself/herself among his/her peers by innovative design of a project with between one dollar and one million dollars of electrical equipment installed. This year we are pleased to announce that our very own Jason DeRosa, PE, LEED AP BD+C was selected for this prestigious recognition for his work on our CAN TV project.

Jason served as the lead electrical engineer on the CAN TV project which consisted of the design of a new one-story 25,000-square-foot state-of-the-art facility located in the Illinois Medical District in Chicago. The new building houses: multiple studios with control rooms, editing/screening areas, equipment and uninterruptable power supply (UPS) rooms, conference and office spaces, and non-technical public waiting and meeting spaces. The project was started in December of 2014 and was completed in August 2015 with a construction budget of over $6M. The electrical scope under Jason’s management included the design of the electrical distribution system in the building, which included an isolated ground system for sensitive production equipment and computers throughout the facility, and a UPS system to back-up approximately half of the data center. He also engineered the low voltage conduit and basket tray sizing and routing throughout the building and oversaw the lighting design for both the building and parking lot.

The newly completed CAN TV facility is highly visible and allows the studio to fully leverage their space to achieve their mission. The new building provides many opportunities for the community to broadcast their interests and views to the Chicago area through the power of technology. It also gives the public an opportunity to learn about independent media where they can freely share their passions and talents with the rest of the city. Through careful engineering and planning, this building was designed to maximize the public’s overall broadcast experience. Primera would like to congratulate Jason on his achievement and all the other winners of the CEE Awards.

For more information about the Electric Association and the Consulting Electrical Engineers division please visit www.eachicago.org. 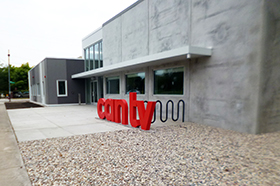 CEE Chairman of the Awards Committee, Joe Romano, presents Primera Senior Electrical Engineer, Jason DeRosa, with the William P. Hogan Award for Technical Merit for his work on our CAN TV project (pictured above).