Just last month, the Airports Going Green (AGG) Conference took place in Chicago for the 8th year in a row. The AGG Conference is the largest aviation sustainability forum in the world, bringing together sustainability leaders, experts, and innovators from all across the globe. As part of our master contract with global aviation planning firm Landrum & Brown (L&B) and the Chicago Department of Aviation (CDA), Primera experts had a hand in planning the four-day event.

More than 400 attendees from 11 different countries participated in this year’s conference. There were 30-plus airports represented, including small, medium, and large hub airports. The conference aims to be among the greenest conferences in the country and sets an ambitious goal of being zero waste during the multi-day event. This year alone, attendees helped divert more than 95% of all waste from landfills through recycling and composting efforts. In total, nearly 1,000 pounds of waste was recycled or composted throughout the duration of the conference.

Since 2007, the CDA has hosted the annual sustainability conference in partnership with the American Association of Airport Executives (AAAE), the world’s largest professional organization for airport executives. The AGG movement began with a spotlight on the sustainability achievements of the O’Hare Modernization Program (OMP), at a time when the importance of sustainability was just starting to be recognized elsewhere in the industry. The annual conference has become so successful that it will move to a new host-city for the first time next year when it takes place in Amsterdam and will put the spotlight on the tremendous sustainability efforts of Amsterdam Airport Schiphol. Schiphol Group’s CEO Jos Nijhuis used his keynote address to outline their impressive efforts and set the stage for next year’s event.

In addition to learning opportunities, AGG featured a variety of sustainability-focused entertainment opportunities that make it one of the best places to get some fresh ideas for your new or existing sustainability program. Conference attendees enjoyed a tour of Goose Island Brewery’s Chicago sustainable operations, saw recycled airport materials transformed into clothing and accessories by Columbia College students at the annual Sustainable Fabrics Fashion Show, laughed at a Jeopardy-themed sustainability quiz show hosted by Dallas/Fort Worth International Airport’s Ryan Spicer, and sampled local food and brew options at the Sustainable Foods Happy Hour. Programmers and students even had an opportunity to get involved at the first-ever AGG Hackathon which took place the weekend prior to the conference. The two-day competition brought multiple teams together to use their creativity to build apps solving some of the toughest challenges faced by the aviation industry.

The conference concluded with an exclusive airfield tour highlighting sustainability achievements at our very own O’Hare International Airport – one of the world’s busiest airports – which continues to undergo the largest airport construction project in the U.S. Primera has been part of the Master Civil Engineer team, BPC Airport Partners, working on the O’Hare Modernization Program since 2003 and we were thrilled for airport executives from all across the world to get a tour of the new Runway 10R-28L which opened earlier in October. In addition, they were able to see the recently completed South Air Traffic Control Tower for which Primera provided LEED support. Similarly, Primera’s energy modeling experts were involved in the design of the North Air Traffic Control Tower which opened in 2008. Primera’s team completed energy model simulations for the 225-foot-tall, 20,000 square-foot facility that showed an energy cost savings of 10%. It was the first LEED-certified tower in the United States, achieving LEED Silver certification.

Whether performing energy modeling, civil design, facilities engineering or even conference planning, Primera continues to build upon our aviation and sustainability expertise. It was a pleasure to both assist in planning and participate in this year’s Airports Going Green conference and we look forward to all that will happen next year when the conference moves to Amsterdam. 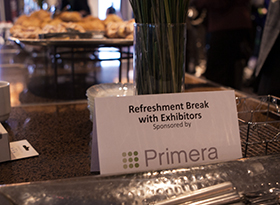