Most people think that GPS is only used for driving directions in their cars and location services on their smartphones. However, that same GPS technology is widely used in road construction as well. For the past several years, contractors have been utilizing GPS technology to help guide heavy equipment operators and others involved in the construction of our roadways.

GPS stands for the Global Positioning System of satellites that the United States Department of Defense and the US Air Force have launched and positioned for everyone’s use. These satellites orbit the earth twice per day and are controlled by the Master Control Station (MCS) located in Colorado Springs, Colorado. Monitor Stations, positioned in 16 locations around the globe, are equipped with atomic clocks and GPS receivers to continuously collect data from all the satellites in their view and transmit this information back to the MCS. There are 27 operational GPS satellites in orbit that send microwave signals, traveling at a constant speed of 180,000 miles per second. Since distance = rate x time, measuring the time it takes for the satellite signal to reach the receiver gives us the exact distance. It takes at least four satellites to accurately describe the position of the receiver on the surface of the earth through a process called triangulation. The GPS constellation of 27 satellites guarantees that receivers can view at least four satellites from virtually any point on the planet.

Use of GPS technology to guide and control earth-moving equipment such as dozers, motor graders, and excavators has quickly become commonplace in highway construction because it speeds project delivery and cuts costs. It has been estimated that productivity of this type of equipment is double that of conventional equipment. When considering the use of GPS, one of the requirements needed in machine guidance is a three-dimensional (3D) terrain model known as a digital terrain model (DTM). Current design practice dictates that highways and other infrastructure facilities are designed in two-dimensions using traditional computerized design programs. GPS machine guidance technology requires that these designs then be converted to 3D representations before they can be used. The conversion is usually completed by the construction contractor, which adds time and cost. However, completing DTMs during the design phase is the next logical progression and starts to make the process more efficient. This explains why it is the newest requirement set forth by the Illinois Tollway.

When GPS first came to the forefront in road construction, Plote Construction, a leader in general contracting and heavy highway construction, was ready to harness this new technology and put it to use in the road building industry. Tim Seiwert, GPS Operations Manager for Plote, explained that incorporating GPS into their equipment has resulted in significant cost savings. The conventional way of building a road (without using GPS) requires a survey team to work hand-in-hand with the earth movers. This survey team must stake out the project and check the grades as the work progresses. According to Seiwert, the cost of out-fitting the equipment with GPS, training the operators, and preparing 3D plans, is equal to the cost of the survey crew during the initial year. After that, the cost savings sky-rocket, covering maintenance and updating costs as well. Tim also mentioned that all new Caterpillar earth-moving equipment now comes equipped with GPS. Although the GPS receivers on earth-moving equipment can talk directly to the satellites, Plote has determined that setting up a base station for each project cuts down on transmission errors. The base station is the direct link to the satellites and it gives clear signals to the operators on the jobsite. Tim chooses locations for the base stations near the jobsites that can be mounted high for less interference, and that will easily transmit the information to all the GPS units on the job.
It’s only a matter of time before all transportation agencies will need to produce 3D models and Primera is ready to help. Our Transportation Design Group has the knowledge and ability to produce quality 3D plans for many applications. 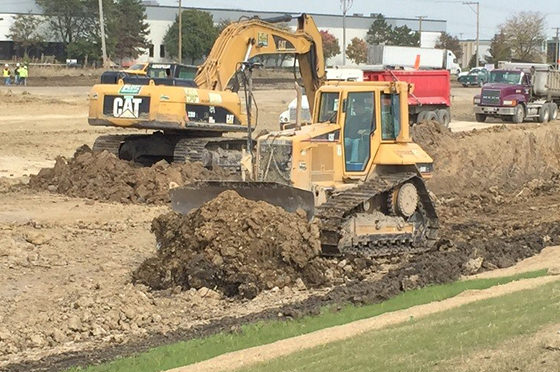 Use of GPS technology to guide and control earth-moving equipment such as dozers, motor graders, and excavators has quickly become commonplace in highway construction because it speeds project delivery and cuts costs.