Primera Engineers is pleased to announce that Dr. Pedro Cevallos-Candau was named 2015 Chicago Illini of the Year by the University of Illinois Alumni Association (UIAA). The Award was created in 1997 and recognizes up to three graduates of the Urbana-Champaign campus residing in the greater Chicago area each year. Award recipients are selected based on overall professional achievements, contributions to the greater Chicago community, and a demonstrated interest in the University of Illinois.

Dr. Cevallos-Candau earned both his masters and doctorate degrees in engineering from the University of Illinois at Urbana-Champaign. He is the co-founder, President and Co-CEO of Primera. Under his leadership, Primera has grown into a client-focused design firm with nearly 200 outstanding professionals and a well-deserved reputation for quality service and innovation. In addition to his business acumen, Pedro has worked assiduously to empower Hispanic professionals in the Chicago area, helping to found the Chicago Chapter of the Society of Hispanic Professional Engineers and create the Hispanic Alliance for Career Enhancement. He has served on the boards of directors of several professional engineering societies, including as President of the American Council of Engineering Companies of Illinois. Currently, he is Chairman of the Board of the Illinois Hispanic Chamber of Commerce and President of the Rotary Club of Chicago. Pedro’s efforts also include maintaining a strong relationship with his Alma Mater. He has proudly hired Illinois graduates and interns, served on the board of the Civil and Environmental Engineering Alumni Association and participated in Minority Engineering Program events. An enthusiastic philanthropist, he developed Primera’s give-back program, which has donated more than $1 million to community efforts in the Chicago area, and through his leadership, more than $200,000 was raised for the ROTARY/One Foundation and The Gads Hill organization, the latter of which works with children in the Pilsen, Lawndale and Brighton Park communities in Chicago.

“As a proud alum, it’s a real honor to be recognized by the University of Illinois Alumni Association.” said Dr. Cevallos-Candau. “But I share this honor with the wonderful team of people that have played an integral part in the success that I’ve been fortunate to experience throughout my career so far.”

Pedro was recognized alongside a friend of Primera, founder and Principal of Studio Gang Architects Jeanne Gang, and former-NFL player and ESPN-Radio Chicago co-host Howard Griffith. All three honorees were recognized at a reception held last night at the University Club of Chicago. In addition to his wife and son, Pedro was joined by nearly 20 University of Illinois graduates currently working at Primera. 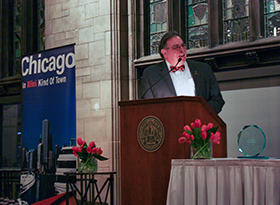 A number of Primera's Illinois Alumni were on hand to celebrate Pedro's Chicago Illini of the Year recognition. (main) Pedro addressing more than 160 alumni and friends of the University of Illinois at last night's award dinner. (above)