Primera is pleased to announce the opening of its Torre Bancomer project in the center of Mexico City. BBVA Bancomer celebrated yesterday with a high-profile ceremony. The event began after dusk, with a show that combined music, fireworks and other visual displays. The President of Mexico Enrique Peña Nieto, Mexico City Mayor Miguel Angel Mancera and a host of speakers from BBVA Bancomer were all on hand for the grand opening festivities.

Primera provided LEED consulting, LEED fundamental and enhanced commissioning, and energy modeling services for the landmark project and was an integral member of the selection committee that reviewed the proposals of six international architectural firms that participated in the original design competition. The building was designed by LegoRogers, a collaboration between Rogers Stirk Harbour + Partners and Mexican firm Legoretta + Legoretta.

At 50-stories, the $650-million headquarters building is the tallest in Latin America. The new tower, standing 765 feet tall, will house 4,500 employees and features 40 elevators, 2,800 parking spaces, 255 for bicycles, a heliport and an auditorium with capacity for 250 people.

“This was an exciting LEED project for us,” explains Lourdes Gonzalez, Senior Vice President at Primera. “In addition to being a landmark building, LEED and sustainability were very new to Mexico. As a result, we were engaged early in the process – back in 2009. Sustainability became a key driver for the entire process.”

Torre Bancomer was designed to physically depict the values inherent to BBVA’s corporate culture, many of which center around building efficiency and sustainability. The tower was designed to enable power and water savings of 30% and 25%, respectively. The contemporary design and engineering solutions used for optimizing energy consumption minimize environmental impact and will contribute to obtaining LEED Gold certification. 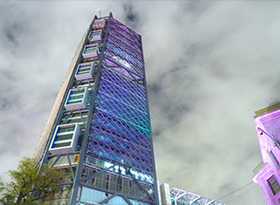 Primera's Torre Bancomer project celebrated its grand opening with a spectacular fireworks and light show. Click the link in the story to watch the video.