3 Important Lessons Learned During the Reconstruction of the Jane Addams Memorial Tollway
February 27, 2018

As part of the Illinois State Toll Highway Authority’s (ISTHA) $14 Billion, 15-year “Move Illinois: The Illinois Tollway Driving the Future” program, the Jane Addams Memorial Tollway (I-90) was completely reconstructed from Randall Road to the Kennedy Expressway. This massive undertaking took place from 2014 to 2017 with the mainline traffic lanes opening in December of 2016. ISTHA promises its customers they’ll keep to their aggressive schedules and open lanes on time; however, when unforeseen circumstances delay the project schedule, quick decisions are made in the field that can sometimes cause issues down the road. From our experience during the rebuilding and widening project, we learned some important lessons that can be applied to other roadway improvement projects.

Lesson #1: Set up your material crusher on the jobsite to save on trucking costs. ISTHA places a high importance on sustainability as part of the Move Illinois program and committed to several design and construction sustainability goals. For example, existing pavements are typically recycled for use in the new pavement. Taking this into account, contractors typically set up crushers on the jobsite to process the recycled concrete and asphalt. This processing breaks the material down to the proper sizes (gradations) for use in subbase aggregate, capping stone, Hot-Mix Asphalt (HMA) and Portland Cement Concrete (PCC) pavement. This has proven to be very sustainable as it contributes to waste reduction and recycling. It’s also an excellent cost-saving method since material does not leave the jobsite.

Lesson #2: Aggressive schedules can sometimes cost the agency more money than planned. Aggressive schedules may be good for customers and to the ISTHA reputation, but most road projects are subject to inevitable delays. Utility relocations, bouts of bad weather, and equipment breakdowns are just some of the reasons roadway projects can be prolonged – and I-90 was no different. In order to catch up to project deadlines, ISTHA authorizes contractors to accelerate their schedules, and even grants a financial bonus for doing so. Ultimately, accelerated or unrealistic timelines can cause agencies to invest more than originally intended or budgeted.

Lessons one and two have purposely been described first to set up the most important lesson learned during the reconstruction of I-90.

Lesson #3: Do not use unprocessed RAP to backfill your deep excavations. The work to reconstruct I-90 was split into two phases. First, traffic was moved to the inside lanes while the outside lanes were demolished and reconstructed. During the Fall of 2015, ISTHA designated December 23, 2015 as the day that the reconstruction of the I-90 corridor outside lanes must be completed in order to switch traffic from the inside lanes to the outside lanes. The weather during the Fall of 2015 was unusually wet, which caused unavoidable delays to the aggressive ISTHA schedule. Discussions with ISTHA, the Construction Corridor Manager (CCM) and the individual Construction Managers (CM’s) produced an “Authorization to Proceed” (ATP) for the contractor to use asphalt grindings for embankment. An ATP means more money for the contractor. This was viewed as a low-cost method for getting the outside lanes completed on time. The work proceeded in this fashion and the mainline pavement (outside lanes) was completed on December 17, 2015, with shoulder asphalt being completed by the following Spring of 2016. Nonetheless, by that Summer, pavement cracks and settlement issues became apparent.

The most severe settlement areas occurred near the new box culvert locations. It is in these locations that embankment depths were the greatest. Investigative borings showed anywhere from four to 13 feet of recycled asphalt pavement (RAP) embankment below the pavement structure at these locations. It was also shown that the RAP was unprocessed. This means that the material was not crushed to a compactable gradation, and instead contained large and small particles. Compaction of the unprocessed RAP then becomes a guessing game. The Federal Highway Administration’s (FHWA) User Guide for Waste and Byproduct Materials in Pavement Construction states, “Where large, broken pieces of old asphalt pavement are incorporated in embankment construction, additional attention is needed during compaction to ensure that no large voids are formed within the fill that could contribute to subsequent long-term differential settlement,”1 which was the case for the I-90 project.

Another issue is the possibility of creep behavior in the RAP. Creep is known as long-term deformations under sustained deviator stresses present in embankments and retained fills. From an article in the Journal of Geotechnical and Geoenvironmental Engineering, “Construction of a structural fill containing RAP is recommended to be undertaken during Summer to reduce the creep strain and creep rupture potential and improve performance of the fill. Construction of the structural fill containing RAP during the cold season is not recommended due to expected increase in creep strain at elevated temperatures of the subsequent season.”2 In other words, warm weather construction of RAP embankments will experience the creep deformations during compaction, thereby becoming negligible. Unfortunately, many of the I-90 RAP embankments were constructed during colder weather, causing the creep to occur the following Spring and Summer. “Due to the existence of asphalt, 100% RAP typically has low strength and high potential of creep and permanent deformations.”3 Many of the deep RAP embankments adjacent to the box culverts were constructed with 100% unprocessed RAP. This means the RAP was not able to be compacted properly because of the presence of large pieces and the lack of a well-graded mix, resulting in voids throughout the embankment. Therefore, the settlements were directly related to the depth of unprocessed RAP below the pavement at each location.

In summary, for any roadway reconstruction project it is important to allow time in the schedule for proper consolidation of embankments. The original schedule for I-90 allowed adequate time to get the proper compaction, however, the schedule did not account for extreme delays due to the weather. 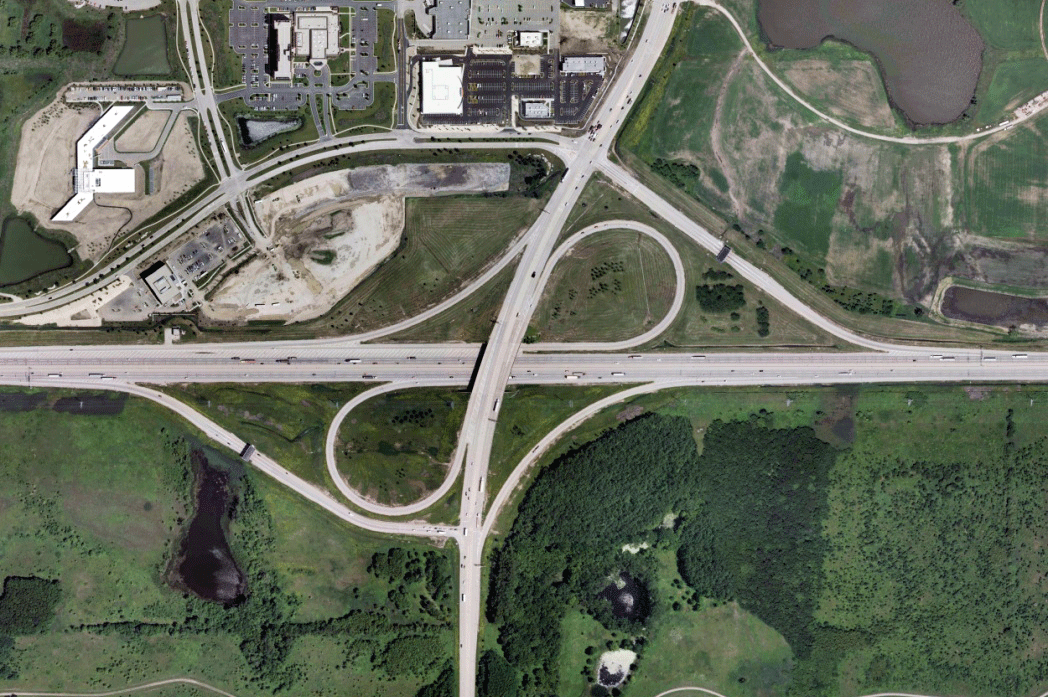 The Jane Addams Memorial Tollway (I-90) at the new Barrington Road interchange (left).
As part of the "Move Illinois: The Illinois Tollway Driving the Future program," the I-90 was rebuilt and widened as a state-of-the-art 21st century corridor linking Rockford to O"Hare International Airport.