According to an article in the New York Times, “the bicycle has made a genuine come-back. New York City and its immediate suburbs have not as yet felt this, as facilities for the use of bicycles are so limited. Yet manufacturers who tried to make this year a ‘million bicycles year’ came only a little short of selling that number. Riders seem to have conquered their fear of the automobile sufficiently to venture out once more on the many miles of improved roads all over the country, and they find it just as exhilarating and healthy as it was when the bike craze was at its height.” 1 Use of the bicycle as a form of transportation has ebbed and flowed over the last one hundred years. This citation is from an article in the New York Times, published in 1916, the year the Illinois section of the American Society of Civil Engineers (ASCE) was founded. The statement above almost reads like an article from 2016 as cycling is again seeing another resurgence in ridership and infrastructure improvements.

In 1900, only 1% of the US owned a car. 2 As a result, the early road system was not advocated for by motorists, but rather pushed by cycling organizations for nearly 30 years before the first automobile organization began advocating. 3 The League of American Wheelmen and bicycle manufacturers worked together to lead bicycle groups which then “… worked at the federal, state, and local level to secure road improvement legislation.”4 The Federal Highway Administration got its start during the early 1900’s as a result of this advocacy. In 1916, the Federal Aid Road Act was authorized with a funding formula similar to today, where money was apportioned to state highway agencies who would design, construct, and maintain the roadway. States were required to create their own highway offices and the federal government opened their first ten district offices that same year. At this point the U.S. was experiencing a dramatic rise in car ownership; by 1934 – 1936, 44% of the country owned a car. 4,5 The post-war period saw another sharp increase, closer to levels that we see today with 100 cars on the road for every 100 people. 6 The engineering community has evolved and kept pace with this rise. Automobiles have greatly influenced U.S. road and community design as demonstrated by the advent of the interstate highway system, the Federal-Aid Highway Act in 1956, and the spread and explosive growth of the suburban housing development. 7 While cycling led early developments in transportation engineering, cars eventually took the lead for most of the 20th century.

Locally, Chicago was known as the bicycle manufacturing capital of the world in the late 19th and early 20th centuries. Additionally, the region had a greater number of paved roads compared to the rest of the country, which contributed to cycling’s popularity here. Following the rise of the automobile, the region and the country saw many shifts in the popularity of cycling and the role it played in society. The first inkling of the modern bicycle movement began locally in 1963, when Mayor Richard J. Daley designated the lakefront trail as a bicycle path. 8  In the 1970’s, Daley opened the city’s first on-street bicycle lane, a simple two-stripe design. Daley continued the trend with on-street facilities throughout the city and established cycling infrastructure such as bike racks, bikes on buses, and the creation of the Mayor’s Bicycling Advisory Council in 1991, which still meets four times a year. Chicago’s current mayor, Rahm Emanuel, brought in an innovative Department of Transportation (DOT) commissioner who further modernized the city’s cycling infrastructure and led to several high profile projects downtown and in the surrounding neighborhoods. Cycling has returned as a respected mode of transportation, one that is planned for and accommodated in all facets of roadway design.

The latest designs of on-street bike infrastructure includes separated bike lanes (SBL), also known as cycle tracks. They represent a new approach to road design, an approach that redefines and reallocates road space for bicyclists. An SBL is an on-road bikeway physically separated from motorist and pedestrian travel by a barrier or elevation change. Associated intersection markings, often with colored pavement, can be used to call attention to bicyclists and provide guidance for both bicyclists and motorists. SBL’s reduce bicycle crash rates, provide a comfortable space for bicyclists, and typically lead to dramatic increases in ridership after installation. One of Chicago’s first SBL’s was installed on Dearborn Street in the Loop in 2012. It includes green pavement at conflict points, bike-specific traffic signals to accommodate left turning motorists from Dearborn, and bollards and parked cars as the barrier. Although a travel lane was removed to fit in the two-way SBL, motorist travel times in the corridor were not adversely affected because Dearborn had excess capacity. Bike volumes increased on Dearborn by 171% after installation of the SBL partly due to bicyclists shifting routes, and partly due to the facility providing a comfortable and safe area for risk-adverse bicyclists that normally wouldn’t ride amongst heavy downtown traffic. 9

The rise of SBLs is being recognized by the federal government. Aspects such as green pavement and bicycle signal faces have interim approval by the Manual on Uniform Traffic Control Devices (MUTCD). Bicycle boxes and two-stage turn boxes (features of intersection controls for certain SBL designs) are granted experimental status. The Federal Highway Administration (FHWA) even released their own Separated Bike Lane Planning and Design Guide in 2015. 10

Suburban and rural areas have seen similar resurgences in cycling over the past 50 years. Much of the focus has been in off-street shared use paths and trails. The Illinois Prairie Path (IPP), a network of 61 miles of shared use trails, was conceived in 1963 and built, expanded, and improved over the subsequent decades. 11 Much of the right-of-way was existing railroad converted to trail use, a trend that continues to this day with the widely successful rails to trail program. Remember the League of American Wheelman, the advocacy group that led to paved roads around the country in the late 19th and early 20th centuries? They have continued to this day in various forms. After a brief hiatus in the mid-20th century, the League was revived in 1965 and eventually renamed to the current League of American Bicyclists (LAB) in 1994.

One of their most popular outreach tools is their Bicycle Friendly Community program that recognizes communities that support cycling. Batavia, a local community within the ASCE Illinois Section, was recently awarded bronze status by LAB in 2013, partly due to the completion of the North River Street woonerf. 12 A woonerf is a shared street where motorist speeds are reduced and traditional barriers between the pedestrian and driver realm are removed to encourage mixing and better eye contact between users. In Batavia, motorist speeds were reduced to 20mph and priority was given to bicyclists and pedestrians. Easy connections to the Fox River Trail were provided with a bike ramp, bike racks, improved lighting, and planters to create a more enjoyable experience for all road users. The Batavia project leveled the playing field between bicyclists, pedestrians, and motorists, creating an environment similar to when the ASCE IL section was founded, where motorists do not rule the road and transportation is about moving people and not just cars. 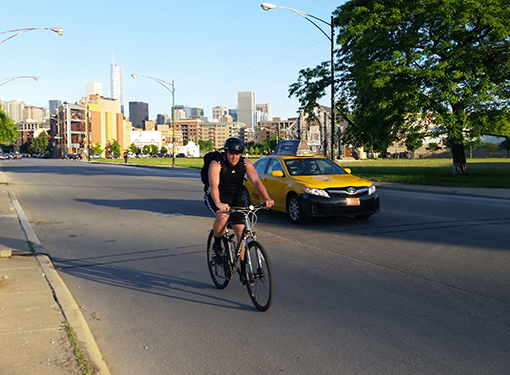 Cycling has returned as a respected mode of transportation, one that is planned for and accommodated in all facets of roadway design.