Individuals today are driving fewer miles and utilizing alternative forms of transportation more frequently. With this change in roadway usage, state and local agencies are seeking ways to improve safety for those traveling on foot, bicycle and public transit. This article is the first in a series of six that will introduce and explore different methods to providing safer and better designed and connected bicycling and walking networks. For more detailed information on our full-service pedestrian and bicycle service offering please contact our experts Scott VanDerAa or Frank Zurek.

Recently, there has been a steady rise of Separated Bike Lanes (SBL) in some form across the United States. SBLs are on-road facilities with a physical separation between motorists and cyclists, such as bollards, curbs, planters or parked vehicles. In 2011, the City of Chicago installed its first SBLs on several high-traffic streets including Kinzie Street, Jackson Street, and 18th Street, and today they now appear on dozens of other streets throughout Chicago’s Central Business District while continuing to be rolled out into outer neighborhoods.

SBLs provide many benefits and very few negatives. They have been found to reduce overall crashes, increase rider comfort (an important facet of sound bicycle facility design), and even increase understanding by motorists since cyclists are provided a clear and predictable path. In a survey conducted by Primera Engineers for the Illinois Department of Transportation (IDOT), 37% of cyclists preferred a SBL compared to 26% who preferred to use a traditional bike lane. Additionally, a crash analysis by Primera showed a drop from 182 crashes per million bicycle miles to 90 after the installation of five one-way SBLs in Chicago (the study was completed utilizing bike counts to account for ridership trends and crash volumes over a five-to-six-year period).

Designing and incorporating SBLs are not without challenges. For starters, how are conflicts mitigated at intersections? Adding a physical barrier between the cyclist and the motorist introduces blocked sightlines, where turning motorists may not see the cyclist traveling through the intersection. Likewise, weather can also pose an issue with installed SBLs. For example, if bicycle lanes are traditionally narrower than a regular traffic lane, how can snow plows fit to clear the snow? Furthermore, drainage issues may arise when a curb or median is introduced. If this is the case, are improvements to the existing drainage system required?

SBLs can be one of the most expensive on-road facilities to install, but they ultimately provide one of the highest levels of safety and comfort for cyclists in urban areas. The challenges are solvable and municipalities and states, designers and planners should not be discouraged from considering this as an option in their bike accommodations. Let’s review some of the solutions to the issues stated above:

Intersections
While Primera’s crash analysis showed a drop in overall crash rate (a testament to the overall benefit of SBLs), an increase in the percentage of crashes at intersections was found, rising from 66.3% before installation to 73.2% after installation. Careful consideration is required at intersections to mitigate this increase. Options include: lateral shifts, mixing zones, turn boxes, two-stage turn boxes, and intersection crossing markings. Stay tuned for future articles that expands on what to do when the barrier separated bike lane reaches an intersection.

Maintenance
Because the width of an SBL varies, most conventional snow plows and some street sweepers may not fit within the confines of a physically constrained SBL. Designers can choose to make the lane wide enough to fit existing equipment, but doing so could cause confusion about it being a motorist lane and result in additional enforcement challenges and design adjustments. Some SBLs are divided by a removable physical barrier. For example, the City of Chicago temporarily removes plastic bollards on some SBLs to allow traditional city plows to clear the lane. However, in order to keep the SBL clear, the current trend is toward designing narrower lanes and using narrow-body plows and street sweepers. Costs
The cost of installing an SBL can vary from $100,000 to $800,000 per mile. The wide range is because every case is different and mostly dependent on type of barrier and if roadway or drainage improvements are required. A basic SBL with plastic bollards that utilizes a lane of parked cars as a barrier is a popular and economical option that keeps costs down. The City of Chicago installed their first SBL’s for $170,000 per mile using this option. More advanced separation may require retrofits to existing drainage systems, however, IDOT recently installed a curb-separated bike lane on Clybourn Avenue in Chicago without needing to make adjustments to sewer structures. IDOT simply designed cut-outs in the new curb at key locations for water to drain from the crown of the roadway to the existing curb where the inlets were located. With that said there are many options that can be used to minimize the costs of an SBL.

If you have any questions about Separated Bike Lanes or your next pedestrian and bicycle project, let Primera help! Please feel free to contact our experts Scott or Frank.

Stay tuned for our next featured article in the series where we will take a look at Bicycle Intersection Markings. 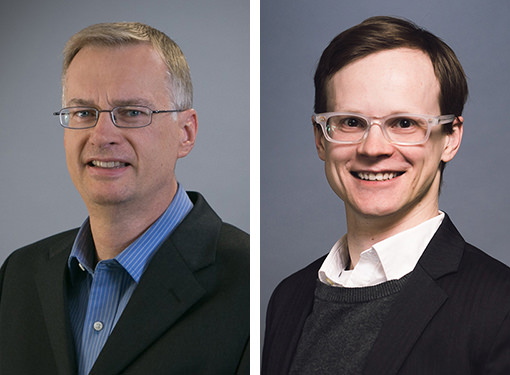 The addition of Separated Bike Lanes are on the increase as state and local agencies seek ways to improve pedestrian safety. Pictured on the left is a family riding along a parking separated bike lane in Evanston, Illinois. Pictured above are our authors Scott and Frank.

Scott is one of Primera’s leading transportation experts. He has over 30 years of experience in the planning, study, design, and maintenance of highways. He has significant experience with project engineering and management, reconstruction and rehabilitation projects, traffic engineering and studies, geometric design, preliminary/phase I engineering, design engineering and contract preparation, signing and pavement marking maintenance, contract management, permit reviews, coordination with government agencies and other stakeholders, and extensive knowledge/application of national and state design standards and policies. His 30 year tenure at the Cook County Department of Transportation and Highways included nearly 20 years in the Design Bureau as a Project Engineer and Pavement Geometrics Assistant division head, followed by over 10 years in the Transportation and Planning Bureau as Traffic Engineering and Operations division head.

Frank is one of Primera’s resident civil engineering experts, specializing in complete street facilities. His expertise is the result of nearly 10 years of experience in the design and construction management of civil engineering projects. He has previously worked as a utility coordinator at the Illinois Department of Transportation (IDOT) Division of Highways. He has had internships with both IDOT and the City of Chicago Department of Transportation (CDOT). At CDOT he worked on improving bicycle facilities for the City of Chicago. While at IDOT, Frank assisted the resident engineer and consultants on the lighting, communication, and surveillance contracts for the Dan Ryan Reconstruction Project. An avid bicycle enthusiast, he currently owns three bikes: a road bike for suburban trails, a mountain bike for the single-track in the Palos forest preserves, and a utility bike for commuting through Chicago’s winters. He understands first-hand the importance of properly designed bicycle and pedestrian facilities.