Since the 1950s, precast prestressed concrete (PPC) beams have been an essential component in bridge construction throughout the nation. Whether traveling on an expressway, tollway, or in an urban area, one can’t help but happen upon structures utilizing concrete beams. This is largely due to the many advantages that can be gained by using precast concrete beams versus reinforced concrete, such as increased durability, longer spans, and the ability to withstand higher loads. PPC beams also have some advantages over steel beams, such as lower initial cost and lower maintenance costs in the future.  However, recently there has been a decline in the number of new concrete beam superstructures. To combat this new trend, the Illinois Department of Transportation (IDOT) developed new PPC IL-Beam sections earlier this year.

There were several reasons concrete beams were seeing a decline in usage. Both existing standard options for concrete beams—the I-Beam sections and the Bulb-T-Beam sections—have beam depth-to-span ratios that are not competitive with steel beams. Using these deeper beams often results in raising the profile of the concrete beam options, which in turn increases the associated roadway costs by requiring more of the approach roadway to be replaced, additional embankment to meet the higher grades, and possibly, the purchase of additional right-of-way. Even though steel beams often have higher or similar initial costs, the net cost of the entire project has a tendency to be higher for concrete beam structures when compared with similar steel beam structures. Perhaps the largest improvement in the new IL-Beam sections is the ability to achieve longer spans without increasing the depth of the superstructure.

Another issue with the existing Bulb-T Beam section is that its wide top flange can make it difficult to place a required stage construction joint. This can cause problems when the staging options are limited due to requirements to keep a specific number of lanes in each direction open. The wide top flange can also be a hindrance to providing required deck drainage in the proper place, as well as completing deck closure pours. As a result, the new IL- Beams have two top flange widths for beams with depths of 36 through 72 inches: either 24 or 38 inches. This, along with the opportunity for wider beam spacing, provides the owner and engineer with more flexibility to decide on the best design for the project.

Another issue IDOT has experienced is the inability to salvage existing beams. The beams are being removed and damaged in the process so these beams are no longer usable. To reduce this occurrence, the new IL-Beams have a top debonded flange area as well as narrower and thicker top flanges.

To create a more feasible PPC beam alternative, new sections were developed with several different characteristics, in addition to those previously touched on, intended to increase the performance of the PPC beams. Higher strength concrete was utilized to increase the strength of the beams thereby helping to provide longer spans as well as create opportunities for wider beam spacing, which could decrease the number of beam lines and increase flexibility for the placement of drainage scuppers, stage construction lines, and deck-closure pours. A larger bottom flange drastically increases lateral stability necessary for the longer spans. The additional area created by the top and bottom flanges as well as a new curve applied to the transition between the web and the flange allows for additional strand options. Furthermore, standardized spacing of shear reinforcement allows for increased fabrication and durability.

With the addition of the new PPC IL-Beam sections, owners and engineers are provided another more viable PPC beam option allowing for greater flexibility to determine the most cost-effective solution for a specific site. 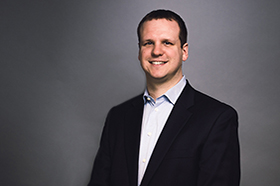 Recently, there has been a decline in the number of new concrete beam superstructures using precast prestressed concrete (PPC), such as the one pictured to the left. However, to combat this new trend, the Illinois Department of Transportation has developed new PPC IL-Beam sections.

Jonathan is a professional engineer with experience in the design of transportation projects. He has been involved in various aspects of project design including: highway geometrics, traffic control and staging plans, signing, traffic counts, quantities calculations, profile grade elevations calculations, and QA/QC checks.